Nature does not bestow virtue; to be good is an art.

Seneca wrote that...
And the words ring so true still, even today... eh?

Even in this downtrodden cynical era we live in... *LOL*

But the artform is all but lost these days!
It is sometimes sooooooooo hard ''to be good'' - especially in the face of well-organized yet deeply absurd and moronic adversity...
Ineptitude is found everywhere these days - you know it well, I'm sure...
Brainless adversaries are everywhere - not to mention only plain bureaucratic annoyance!
And what if we all turned the tide - on them?
What if we showed them that two can play the same game indeed!?
Generations X, Y and Z would be hard-pressed to figure out an effective way to promptly accomplish this - for that all-important task, one has to look to the elderly... Check out the comments section (again - duh) for the whole sordid (and reputedly all-true) story... *lol*

By the way, for those who are in doubt, I am not advocating a revolution here (the only type worthy of the name is violent - although, in Quebec, they had the absurd notion that they could conduct a ''Quiet Revolution'' and get anything accomplished that way... Quebec - land of the snow, the oxymorons and the turds apparently! That applies to the ''Québécois Pure Laine'' by the way - exclusively! Oh... okay... A few ''allophones'' up there too are qualifiers for that dubious title...)
No... I am no revolutionary... I prone evolutionary action! And, really, the only way to do so - is to do as Christ said ; by opening our hearts! ;) 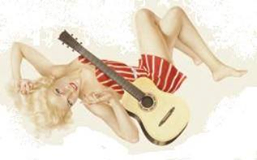 For I really-really-really-REALLY dislike the French!
Whether they are vanitous belliquous fools from France itself
Or plain bombastic foul-mouthed language-defilers from Québec!
I simply abhor most of them - with rare and thus precious exceptions!
So, to see me praise the merits of French lyricists, songwriters, paroliers, poets, artists, singers, "auteurs-compositeurs-interprètes" - it is a noteworthy event!
Even if I do say so myself that is, of course! *LOL*

Invariably, though, I give the kudos post-humously;
either they are dead or their careers are...
Oh well - their art lives on! :)

You might want to use that seldom-used translation feature on your toolbar now... ;)
Check out "la section reservée aux commentaires" maintenant...! ;)

Oh - and I am NOT making any excuses; not being apologetic one bit here;
I am not saying I'm sorry about A THING here!
Talk is NOT cheap when one has high enough standards in both vocabulary and what deserves to be said - and what deserves not to even be considered for any mention at all! ;)
À bon entendeur, salut!

Sometimes, you just have to be violent.
Hey, JESUS Himself got to throw a tantrum in the Temple!
Dubya may be an idiot, but going to war on the flimsiest reason to do so was good for the USA overall - their economy is better off for it... The peeps have their minds off the shadowy spectre of another terrorist attack... everything's good!
Yeah, right...

And, scaled all the way down from Godhood to mere individualistic human level, the urge... The pulsion to simply HIT your ''fellow man'' is oftentimes irresistible - especially when thy fellow man is a lowly first-class jerk; it goes without stating, of course! In the light of all this deeply-incrusted into the human psyche ''attitude'' - one can easily approve of the occasional smacking dispensed; when said smacking is truly well-deserved...!
It takes discernment to assess that though...

Put it out of its misery, I say...
I really wanted to see the replacement players anyway - sort of an alternate universe NHL... Or simply "FAUX NHL"... *LOL*
*That* would have been interesting; a true even playing-field, with no prima donnas on ice - and with only one drawback, really; lousy clubs like the NYR or the Habs would have as good a chance as everybody else...!

This unlikely scenario is not to be - then nothing should be!
I know of better scenarios that were not - so, no; seeing no NHL hockey at all is clearly NOT the worst thing that could happen here, AT ALL...!

I do wonder why, of all the owners, the Dallas Stars guy is the most outspoken...
His team did win the Stanley Cup not too long ago (but then, look at the competition - it was against Buffalo! Buff-ah-low... as the jokey intonation went - don't ask where! *lol*)
*However*, truth be told that the Stars are, most years, shining on paper only...
And they are not writers, so, that is not good enough, is it? (Get it - not good, on ice? In the rink? During actual testosterone-enforced competition?!?)

Maybe the Dallas GM is more transparent than I give it credit to be! Aye; maybe, just maybe his true motivation is too obvious - with a band of under-achievers like that, he SHOULD not want another (even if shortened) disappointing season to happen... Indeed! ;)

keeping in the valentine -or is it cupid (sic)- spirit...

Cyber socializing: even better than the real thing
by Luciano Pimentel

In this day and age, one does not have to put up with the routines and hassles of going out, dressing up or even putting a brave face on anymore. One can stay in and, from the cozyness of one's own home, one can mingle with one and all! Chat rooms, instant messaging, webcams, message boards... even the old stand-by, the e-mail (with sufficient pictorial attachments - whether it is doctored or not is up to you!) - all of these means are safer and may be even far more pleasant ways to socialize! Safer too for few hassles are involved - although it is debatable if indeed such dalliances are truly more casual than the old-fashioned ones...
It all depends on the individual, really!

Fact is, interaction on the web can be taken as seriously as live and in the flesh interaction. And this can be seen all across the palette of cyber-offerings... as that of human emotions. Message boards routinely see veritable hatred develop and rise sharply between opposing posters championing diametrically conflicted viewpoints on any given topic... Likewise, chat rooms are often the unceremonious virtual grounds of those first few sparks between posters who recognize in each other a kindred spirit. But it does not make the emotions involved any less real necessarily speaking... and any sudden break-up any more "casual" per say either! Disappointment is disappointment! It all boils down to the degree to which the participants have immersed themselves into these unusual proceedings... These are less and less "unusual" though, for the bar scene is now splitting -pretty evenly it would appear too- the dating scene with cyber-encounters; one leads to the other, really!
A fine collaboration of sorts…

On the other hand, for the true conversationalist, these proceedings can be even better to dig out the truth faster... Think about it - in an instant messaging situation, even with a webcam on, the fluff factor is minimalized - in favor of substance. One is forced to actually listen (or read) if the person has anything worthwhile to say. Once that is confirmed -for it isn't always- the expert conversationalist can take control of the chat situation and, by asking the right questions at the right time, get to know the other person better in fifteen minutes than he would have in several dates maybe! One cannot peer into another's soul when preoccupied with the all-important (not) task of winning a lengthy tongue duel... Not much is learned then, aside from the value of the kisser maybe…! Conversation is the key in the courtship stage – and it is no coincidence that IM providers call these things “conversations” …

"There is only one happiness in life, to love and be loved."- George Sand

Then again... what does a woman who called herself George (were Dubya and his daddio named after... her?) and had such a disastrous "greatest love of her life" type of relation going throughout her entire eccentric existence... what does such a woman, thus, really know about anything...?
But I digress...

On the subject of love though, some would-be money-makers recognize St-Valentine's Day as the the ideal trap for suckers out there that it really is!  Romantic fools abound and there are plenty of them loose out there - and they know it. (Not to take it too badly, folks - I am afflicted too - yes, I am an incurable romantic... but a smart consumer! So I believe it balances out - I can escape such traps!)
And so, what do I find upon logging to one of my usual news sources (affiliated to msn.com)...
This fine topic and this link...

How to celebrate being single:

Feel free to check it out - and leave a comment too.
Mine was brief and to the point:
"Dream on, lava lamp heads!"

Hey - valentines; don't fuss over this now...
After all, love & death are the two sides of life that spice it up any... correct?
As far as the masses go anyway...
And, thus, I am pleasing the majority - that which allegedly elected twice over Dubya...
That which prefers Classic Coke to improved Pepsi...
That which goes bananas over one-hit wonders...
And has the collective attention span of a five year-old hyperactive all-around insane and inane kid... hmm?

(May it be hoped also that the reference to love & death not deceive any film aficionados out there - I am not exactly a Woody Allen fan - although Love And Death was one of his least annoying films -sort of- and having Diane Keaton around in those elegant dresses helped a lot... But I digress...).

One feeds off the other, really...

Now there's philosophical food for thought for you all... More, in the comments section!