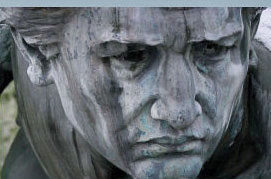 Blog Action Day: on this day, we nail poverty right on the kisser!

I look around me, whenever I set foot outside, everywhere I go.
By that I mean that I really do scrutinize the environment that I pass through, each and every single time, wherever my activities may be taking me; I scrutinize, I study and I observe. And what my scrutiny has yielded over all these years has never ceased to disappoint me. It was the same in 1985 as in 1993 and it is the same today: we are living in a *me-myself-and-I-world* - a world in which it is everyone for himself. And that is very deplorable indeed.

Every action, almost, in such a world is NOT accomplished with the main objective of making a difference and helping another - rather, it is bound to a career edification mindset, building one's curriculum vitae in a long-term plan to edify ONESELF. Where is the good of another in all that? Secondary, always, if not further down the list. Those who are exceptions to this rule can be counted with the fingers...

The majority, hence, is set on accumulating riches for their *me-myself-and-I* and not dwell for too long on what that could mean for anyone or anything else around... Sure, quite a lot will alleviate their conscience a bit, by making a few donations to a finite number of charities, for example. They will do so with one thing always in mind, however; the yearning to collect a tax receipt after each donation, for giving without getting something in return -even if only a perk- is inconceivable nowadays... No one is to blame for this: we've all been conditioned to be like this.

Even so - that line of thinking that has "monetary gift" come to mind as the "solution to all ills" is a trap. It sets us on the path to feel guilt-free for a myriad of wasteful acts - as long as we've paid for it (or given to charity in order to compensate) we may believe that we can be wasteful as much as we please.

One should strive to abhor the wasteful ways of anyone else: without focusing on the wasteful person at all but only on his or her wasteful ways, it goes without mentioning I do believe! Every single day of any given week, practically 24/7, there is so much stuff getting thrown away; "stuff" that the have-nots would just love to have, but cannot get for themselves in this world set upon consumerism. Whether it is bakery products, other perishables, fruits and vegetables or ready-to-eat food, from a restaurant or any supermarket there is in existence, the moment it is deemed unfit for sale to the customer, it gets thrown away. And in the spirit of pure capitalism, to avoid disrupting that ever-fragile system, the wasting simply has to be! Of any given production line, be it freshly-baked cookies or cooked meals on-the-go, they will throw most of it away - for it goes unsold by the allotted time for the sale to be made... They throw it away if there is but a single tiny blemish on the food item too: and that is just NOT RIGHT. Rationing is something of an extremist counter-proposal here, but one has to admit that it would curtail the wasting and circumvent this shameless situation. For, while we bask in abundance, so much so that it overflows and we wind up NOT being able to consume it all, others are stuck in abject misery. And it isn't in some faraway wasteland at all - it is also right nextdoor. Oftentimes, in a neighborhood that is delineated by three or four super-shopping centers, there is a high concentration of the impoverished who simply cannot afford much of anything. And these supermarkets and restaurants place the forefront priority where it has to be placed: after all, they are running a business and they want to earn a living too, as anybody else wants to. So they have their priority set as *making money* - and *do the right thing* only whenever possible. When they can "do the right thing" - they hope to do it so that it generates a copious amount of good publicity for their brand - and it is entirely understandable. Instead of donating it all to a variety of potential charitable organisations, including Church-basements that have a perishable and non-perishable food distribution system in place, they want to make a deal with only select organisations and if said organisations are not interested, all the food goes to garbage. It is downright indecent, but totally logical since next to no one goes to Church anymore, right? An organisation that specializes in catering to the needy assuredly will generate more *positive feedback* for the entreprise, restaurant or grocery store, in the secularized society that we live in today - that cannot be denied. A corporate entity that gives to such an organism, no matter how it impacts society negatively otherwise, will be perceived as "a force for good" because it basically is so indeed; it plays the game by the established rules and tries to make the best of it on both ends of the spectrum.

In other times, I believe these would be called the lukewarm that will only score a C+ at the Final Exam of all exams...! But I am digressing here - and this is not the lukewarm blog anyway!

In total and complete irony, we live in a society that has the "have-nots" actually contribute to the "haves" well-being, to boot, thanks to the wondrous creative genius behind the very concept of income tax. Most days, I can only imagine how God must find all of this down here to be supremely ludicrous - but I'll also refrain from going down that route now, for this is not the ludicrous blog after all!

The poor, as the rich, are a multi-layered strata of society wherein we can find so many different shades of gray: the basic ideal remains though, that one and all should be able to eat to their heart's content. If not indulge in all manners of consumerism - at least have their stomachs full. It may be utopian to hope for it, but this remains the ideal society everyone basically wants to see one day - no matter what "system" it could be based upon.

One thing is for sure though: it is none of those that we've been experimenting, tampering and/or dabbling with so far.

In closing, allow me to say in writ, right here and now, how pleased I am that the luminous blog is a part of B.A.D. (which stands indeed for BLOG ACTION DAY) - a day in which advocating is done en masse about ONE given topic and this year's topic is POVERTY - as you could tell, I'm sure.

Poverty should not be, if one follows parameters set by human logic, same as virtually any politician out there would want us to follow...

Divine Thought Has Said It: as long as the world endures, you will have the poor with you. They will never cease to be; there will always be more and more, actually.

It is up to us to learn to share a little more, a tiny wee bit more efficiently. And evenly. Doing it degree by degree should be feasible - despite our conditioning and all...