The Church must have thought that All-Hallows' Eve and All-Souls Day (aka the Day of the Dead) nestled on the ol' calendar BACK TO BACK was a tad too much on the morbid side - so they split them up by inserting the very wholesome ALL-SAINTS DAY (yesterday) right in-between the two (by the way, where I come from, All-Saints Day is known as "La Toussaint" - one word made out of "Tous Les Saints" which is, literally, "All The Saints" - this just to say that it is not only the little boogers today that make up new words at the drop of a needle; the little boogers of yesteryear also made them up, all the time! ;)
But I am digressing here, aren't I...

Every year even I, as luminous as I may be, I find myself also in doubt in regards to what day follows the "un-holiday" known to most as Halloween and to others as All-Hallows' Eve - as the EVE part there, as surely as hell will burn for all eternity, implies that, immediately after that day, it should be the Day of the Dead indeed!
I get a good ten seconds of confusion there, hence, every damn year - until I remember that those Church-enforced rules must be still, ah, enforced - indeed!
The Vatican does have an ARMY, after all - it is a funny-looking army with just about zero firepower and a whole lot rides on, what-do-you-know, FAITH... But they have guards - legions of devoted and devout souls - and they've got CONNECTIONS in VERY HIGH PLACES TOO...! ;)

And you thought nobody listened to the Church anymore - thank God it is not the case, at all, you unbeliever you!! ;)

So, as a friend of mine said today, ALL HAIL THE DEAD; the *good* dead, that is! Those saintly men and saintly women who left us behind to be with their Maker - may they put in a good word for us as we are supposed to pray for them too...!
Because, you see, what differenciates the "good" dead from the bad rotten variety, is that the "good" dead looks back and worries (sometimes they're even tormented) by the thought of those loved ones left behind to fend for themselves...
Especially in the light of times of Tribulation that lie still ahead... NO good father, mother, brother, sister, spouse or friend will leave behind a loved one without worrying how that loved one will manage in his or her absence...
Our prayers will help alleviate such worries and torments, yes! (After all, if we have time to pray and devote to GOD above all, we must doing okay - EH?)

In sharp contrast, the "bad" dead look back in mere resentment that they no longer breathe while WE still do! They'll look back in anger and wish us nothing but ill - heck, those are the wicked spirits that haunt places, usually...!

Hmm... this is sounding more like something about Halloween than either Saints or Souls in general...!!!
Mea Culpa! :!

In conclusion: the Day of the Dead -
the day in which we realize that, no matter how many of us there are and even if we get to be 7 billion... 10 billion... 15 billion - the dead will always outnumber us by a wider-than-wide margin! :!

We might as well make buddies with them; and the way to do that is very simple too! ;)
You drink a brewski for someone that you know loved having one! You indulge in treating yourself in the exact same way someone who departed used to do when they were alive (on this earth, rather - they are "truly alive" when they shed their mortal coil and are purely spiritual; IMHO! They are even more "alive" when they are spiritual and living In The Spirit! Ask your local pastor what that means! ;)

You pay homage - show your respect - commemorate someone by partying in his or her name...!
They'll be there too - in spirit! ;)

Mexicans know how to do this - they mastered this to the utmost perfection! Aye, they party hardy on this day down in Mexico - much better than we may on Halloween here...!

But that is another story!
;)

A Happy Halloween - Addams Style, Anyone?

"All-Hallows' Eve
in the Addams Mansion..."

A tongue-firmly-in-cheek analysis
by Luminous me!

The classic show "The Addams Family" was always perplexing to the more inquisitive minds among the viewership (or those who just like to nitpick a lot) as to what was the exact nature of the Addamses... Were they warlocks and witches? Average ghouls? Vampires (minus the bloodlust - Morticia sure looked like a vamp though!) or something else - maybe even something worse...?
No one ever got a satisfying answer - as the characters' creator, Charles Addams, never supplied one before passing on...

The fact is, it is relatively easy to assess what an Addams Family is - to me it is, anyways! I place myself in the shoes of the great Charles Addams and I see it all very clearly: his is an enlightened point of view, whether it is about the macabre, life itself or simply within the context of the microcosm he weaved for himself there, at his creative whim and fancy really...!

The Addams Family, hence, is nothing more and nothing less than people closely based upon different aspects of their creator's personality - and they, like he, are finely-attuned to the reality of Life and Death... They all know that death is NOT the end and that life is to be lived without a care, for nothing really matters aside from doing to others as you would have them do to yourself... In the Addams Family's innocence and lack of malice (I am, of course, discounting Tuesday here... Oh, no, sorry - that's Miss Weld! I mean Wednesday - and her bizarre playtime habits with her bro Pugsley... I shudder at the thought of what she might have done to baby bro Pubert if the series had continued...! But I digress...) and in the *joie-de-vivre* displayed by most all -even Lurch at times- one can only get that profound life-affirming lesson, on the spot...! The Addamses are even outright joyous when they are reminiscing about departed relatives, all to be found buried in their backyard cemetery... A family remains a family even in death; and they know that all too well! No silly fears of a loved one coming back to cause you harm here, as was the case in old folklore oftentimes; for there is only genuine unconditional love in this ghoulish family! What a fine example to us all...!

Indeed, Charles Addams had it right once again in this regard too: the only evil relatives to be found are those who join the family through an ill-conceived dalliance of some kind - or very distant cousins with hidden or not-so hidden agendas, like Vlad!
Mr. Addams had it all figured out, I tell you! ;)

The Addams Family -in all its incarnations- was nothing less than a tightly-united clan composed of wide-eyed individuals - just like Charles... and me! Ahh - I wish my own family was so ODD...! Aye, indeed, I can tell you right here and now that I definitely would trade my so-called uncle Mario or even uncle José for an uncle Fester ANY DAY OF THE WEEK - AND THRICE ON SUNDAY! ;)

Now - about ALL HALLOWS' EVE more specifically...
The Addamses, in keeping with the tone set by their usual antics, trivialized the thing - as well it should be too for it is anything BUT a significant "holiday"... Still, one immediately sees the obvious clash between the world of the living and the realm of the dead on this date (and the following couple of dates, namely the Day of the Dead and All-Souls Day... When's All-Saints' Day again? *lol*)
The fact of the matter is - the living and the dead are never truly separated, ever.
Life and Death are ONE - and there still is the other reality of Good and Evil that co-habitate in BOTH phases of our souls' pilgrimage BACK TO OUR CREATOR-GOD...
And THAT my friends is the BATTLE OF EVERMORE!
Forevermore... until God Decides to End it once and for all,
that is.
But that was never the concern of the lighthearted, feel-good (even if in a morbid way) devil-may-care Addams Family; so we can leave it for another day...
and another blog as well! ;)

In the meantime - as Morticia herself would say...
"Have a Happy Ha-lloween!"

And A Luminous Bit Of Advice... 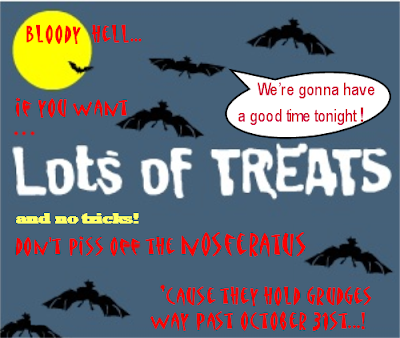