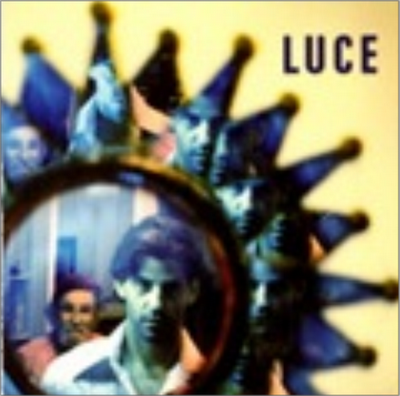 Some of those I esteem as my truer, purest friends have taken to shorten my name, in a sign of spontaneous familiarity and affection. Now, I usually dislike abbreviations of any kind, but this one that I am talking about right here is the exception that reaffirms the rule. My name is Luciano - and I think it short enough to say it like it is always. Plus, I do believe that it rolls off the tongue rather well - no? Still, those truer and purest of my friends have often shortened it to... Luce.

It's all coming together for you now, is it not?

Imagine my surprise when I chance about a CD jacket - the above-pictured jacket, yes - that delineates what appears to be a man and his father watching over him... The name and the likeness are both close enough to my person - and so is the situation. The older man, the father figure on that picture, sports glasses and a beard; two things that differenciate him from my venerable father, and yet, since both are archetypical attributes of the wise man, it also makes the closeness that much stronger - wonderfully enough. This CD jacket was prepared in 2002 - the year I saw something was very wrong and tried to remedy to it... But father and I were to be set on that course headed for damages and separation anyway. Now, as he is in the Proverbial Better Place and I remain on the purgatory-earth, I think of him always in that exact idealistic way that is so perfectly illustrated on the Luce CD jacket: a wise guardian angel watching over his son... Maybe not when the son is looking in the mirror though, but generally-speaking, yes!

Click on the Luce picture in order to find yourselves on Luce's website and webSTORE - where you can purchase that CD (which I endorse, henceforth, and highly recommend) and other CD offerings from Luce - the band!

The videoclip, found on YouTube (of course), is an excerpt of that album; "Good Day" sung LIVE for the occasion.

And, yes, it was, all in all, a very good day indeed - the day in which I discovered Luce, my namesake band! And pretty much lookalike too (it's all in the eyes!)

Most of all and most importantly, of course, is the similitude I see in what the soul of our respective artform and style truly is all about.

Verily, it is something like this that makes us artists and troubadours of all trades realize that - we truly are all the same. With the same experiences, artistic vision, interests, values, fascinations, spirituality, obsessions even.

Spiritual resonance that echoes in the same key -
no matter what the artform may be.
Now that is something, indeed!