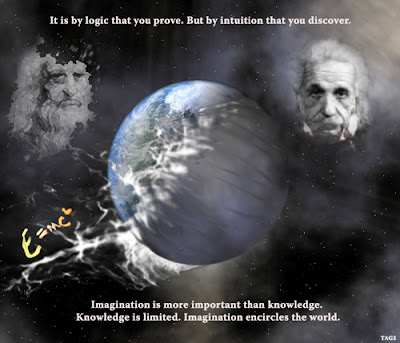 The top quote -and the first "I", INTUITION-
belongs to Leonardo Da Vinci
The second one, in an extended version - the second "I" -
is, of course, Albert Einstein's.

I will suspend disbelief entirely and buy into the fact that it is an actual quote and not some clever line scripted into the film "Callas Forever", starring the phenomenal Fanny Ardant who is entirely credible in the title role especially when she delivers this line: "a triumph is worse than a failure if the price is too high"

No one more quotable than PADRE CRUZ though -
(of course, MOTHER TERESA is on par with him...!)

«Aqui acabam as palavras, aqui acaba o mundo que conheço; aqui neste tremendo isolamento onde a vida artificial está reduzida ao mínimo só as coisas eternas perduram. O Corvo nao tem peso no mundo; mas nunca senti como aqui a realidade e o peso do Tempo.»
«Here end the words, here ends the world that I know; here, in this sad isolation where the illusionary life is reduced to its barest minimum, only the everlasting things continue to exist. The raven has no weight in this world; but it never felt as here and now the reality and the weight of Time.»

"Um santo é alguém que, apesar dos limites e defeitos, vive plenamente a vida de Deus. com humildade a vive, não precisa de o mostrar aos outros."
«A saint is someone who, despite his limitations and flaws, lives fully and completely a Godly Life with humility; for he does not need to show it to others.» - PADRE CRUZ (1859-1948)
translated by Luciano Pimentel (1969-20__)

And so, with the third, fourth and fifth quotes here,
we get to decipher the third "I" -
which is
Ingenuity
One has to be ingenious in order to have one mind's ascend
to such a level so it can finally catch but a glimpse
of the Higher Truths.
+++

For someone seeking the Light so much - why, oh, why do I look for the quietness of the shadows also?

The lyrics were composed by another L.P....
Lise Payette,
former politician
and author,
who wrote this song
for her late,
great love
Roland.

A fine songstress is oftentimes
only as good as the song that she offers her public
And here, I do believe that this songstress
has finally found the most magnificent song ever
even better than anything else she had previously offered
her adoring fans worldwide.
A song that resonates with us all -
more so than even many gems found in her repertoire.
A song that touches all - where it matters the most.
No wonder tears came to her eyes
as she sang it for the first time
before a live audience...
She sings of her own inevitable parting
from the love of her life.
She sings of everyone's such heartbreaking loss.

For we are all the same
And none will be spared the same torment.

Is it better to have loved and to have lost...?
It must be.

Does Love exist?
Yes - it does.
George Sand wrote it -
and, as it turns out so fittingly,
there is also a song about George Sand
in the new CD "D'Elles"... 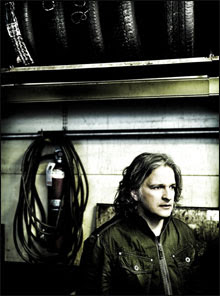 Is this Luminous Luciano?
Is this Lucian, sardonic poet of yesteryear,
somehow still "with us"...?
Is this the mythical
"Misunderstood Genius" -
caught on photo, again somehow,
in his... garage?


Nooooo - it is merely Daniel Bélanger
THE VERY BEST
Québec has in songwriting talent.
Only the deaf and the dumb
(not to mention the belle and the bum,
the blind and the bat,
and the vain and the scum!)
will even "THINK" otherwise...
(Then again,
they know not how to truly
THINK...)
They sure don't know what to think
when they're faced with this:

Daniel Bélanger
a luminous artist
worthy of being showcased
again and again
on the Luminous Blog!
(Unlike some other artists...) 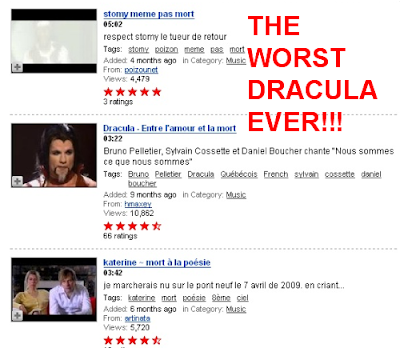 
Daniel BÉLANGER
went through this "phase" himself
but waaay back in 1992...!
And he did so with flying colors
Not so easy to do
when one is ENSORCELÉ...
(Ok - the song's really ENSORCELÉE...
Like somebody's career seems to be...
À bon "entendeuse" - salut!)

These days, good old D.B. is way ahead of the curve
He is not dressing up in halloween costumes
singing insignificant songs... No.
He is a visionary artist
with a repertoire evermore so full of meaning
with a deep soul
and nothing but contempt
for materialism, consumerism, injustice...
All that the other guys are a-ok with - eh?
L'ÉCHEC DU MATÉRIEL is a title
that says it all...

Well, Well, Well... Another Case of Mistaken Identity - Lest It Is Near-Luminous Identity Theft Again?


Oh, I 'd plead "guilty as charged", only if it really was LUMINOUS ME, I would not have stopped at the fence...
I would run over some other things too -
wound up on the porch -
breaking the front door down -
not to mention a section of the wall -
and run over some skulls while I was at it!
Catch my drift? ;)


Whoever this Luminus is,
and despite hailing from the brilliant town of Boston,
well - he isn't Luminous!
(Once more - if you catch my drift! ;)

He's got a music video or two - and is hailed as
Boston's urban poet!

To begin with - for a town that idolized the likes of
Raymond Bourque and Jean Ratelle
and supported the tragic Normand Léveillé
and even cheered for a Rhéal Cormier too
he really should have known what "MINUS" means...
in French, that is!

Here's another video from the poet:

Quite frankly, I'd rather be mistaken for
AQUA LUMINUS instead:

Or a DOLPHIN LUMINOUS salesman...?!?

Not quite sure yet how I feel about these
"Luminous Works" and their
"Luminous Arc" yet...


But let's wrap this up with the "official" reply to the top accusations made by the bearded redneck in the top video here;

THIS is a genuine "video response" to it right here:


Aye - I could have said it
MUCH BETTER THAN THAT...

In my worst day
with my eyes closed
hands tied behind my back
probably even with a gag on...!!!
(The closest I can get to Houdini...
sorry!)


BTW -
this has been,
counting both drafts AND publications on the web,
the 1000th TLB PRIME/Luminous Blog post - ever!
Yay!