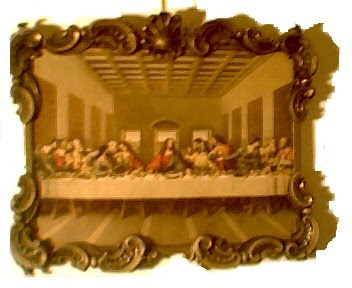 Yes, They Are Among The Stars -

Seated At The Table
Where Manna Is Plentiful
And Everlasting.
Amen To That!

Even headachy and earachy,
I could not NOT notice the date
on the calendar today
And not post something
extra-special
here, on TLB Prime
on The Luminous Blog
To Honor
Two (Rather Than One)
Luminous Souls
+++

My Father
and
My Great-Aunt
Whose Own
Honor Page
I Completed
Days Ago...
Click On The Images
For Both Webpages. 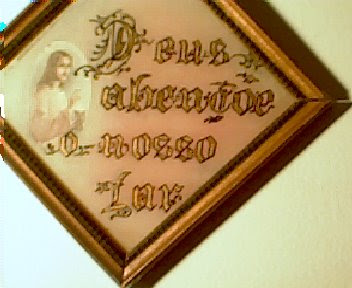 Both pictures here have all at once
historic resonance -on a personal level-
and nostalgic / emotional value.
Both are heirlooms now -
as both were bequeathed to me
by my father.
Both had been given to him too.
To him and my mother.
The reproduction at the top
of a well-known Da Vinci painting
was a wedding gift from a family friend.
The bottom picture is an original work
-a collage, of sorts-
crafted by my aunt Alcina Pimentel
with lettering meticulously done
by her own artistic hand
and framed by my great-aunt
Maria da Estrela Pimentel.

The latter aunt
is assuredly in a place of Light
and I can just imagine her
being among the first
to have greeted my Father,
João Jacinto Borges Pimentel
when he ascended to that
very same place of Light
almost two years ago -
TODAY.

Photo courtesy of NHL Enterprises L.P. (c) 2005-2008
The Jackie Robinson of Hockey!
Willie O'Ree - "Soul On Ice" - is the one!
The "overlooked pioneer" - as ESPN called him, too...
How more "unruly and not giving a damn" can you be than this: doctors prognosticate that you are blind in your right eye and will never play hockey again. You are black, in an era in which there have never been any blacks on ice at the professional level, to boot. And yet, you go on to play, break the "color barrier" at the purported highest level there is (yes, the overrated NHL) and CONTINUE playing hockey, scoring 450 goals over your entire career in both the NHL and WHL! In comparison, Tony McKegney, the first "true superstar black hockey player", only scored about 320 in 13 seasons in the "big league". And Tony had both of his eyes! But never mind Tony...! This is Willie The Bruin's Day - not Tony The Pew!

And, on January 19th, 2008, the Boston Bruins honored the 50th anniversary of Willie O'Ree breaking the color barrier in a Bruins uniform while facing hated rival Montreal - and it WASN'T the first hurdle he'd bypass (after all, he had gotten hit by a puck smack on his right eye in 1955-1956 season while playing JUNIOR hockey!)
Not only the Bruins, who are honoring one of their own after all, but the New England Patriots too, one could say, honored O'Ree on this anniversary year by WINNING CONTINUOUSLY (their "tired bunch of washed-up players", many of which are black, won on Sunday to get their record to an unheard-of 18-0 record! A history-making level of excellence and perfection NONE among the so-called "experts" thought they'd ever see in the NFL! Mind over matter, right there; more on that in a jiffy!) and the Boston Celtics also, who are on a tear and are being led in this "renaissance" of sorts by a triumverate of black players themselves. Three marquee black players who are keen on bringing back the glory and prestige of championships past...! More on that, too, eventually...!
The Bruins, more specifically, celebrated O'Ree by winning both games in a home-and-home series with fellow American Original Six team, the New York Rangers. It couldn't have been better than this (considering the B's injuries!) The Bruins won the first game in a shootout, 4-3, on a goal by defenseman Zdeno Chara. And then, in NYC, the Bruins won 3-1. For most of the game, it appeared to be a shutout after the shootout, as Bruins goalie Tim Thomas led 3-0 and was masterful between the pipes, once again. A splendid way to honor Willie O'Ree's indelible mark on hockey history, indeed - by outclassing the rival big-spending fellow American franchise that got lucky in 1928 to become the first American-based team to hoist the Stanley Cup. The Boston Bruins did it the very next year and more often, overall, than the Rangers - but they should have been the first American team to grasp the Cup, normally, being the first one to have entered the league in the first place. But that is another story...!

At least, no other NHL club -no matter which side of the 49th parallel they are to be found on- can lay claim to this: having allowed the first black player to make history. Bruins coach Milt Schnidt admits not being the one who took that decision in 1958 - "General Manager Lynn Patrick and scout Harold ‘Baldy’ Cotton did," he confirms. The Bruins organization gave Willie O'Ree his chance and he became, de facto, a pioneer - same as the Boston Celtics did with more than one individual when they brought in so many African-American players, most notably Bill Russell of course. The Celtics had the first black coach in NBA history as well. The two Bostonian organizations did not only share the same building, see -the venerable Boston Garden- they also shared the same vision. Granted, the reality of business sometimes puts the kibosh on good intentions - and, in 1961, after scoring the game-winner on a New Year's match-up against, once again, the hated Montreal Canadiens, Willie would wind up traded at the end of that season. And not just to any team either - but to the enemy Habs indeed! The Bruins G.M. might have been in on Willie's blind eye secret, finally, and attempted to sell the enemy "damaged goods" in the process. It was nothing against Willie personally, as Bruins coach Milt Schmidt was so impressed, he had also stated that he hoped O'Ree would stay with the club "a long time." Yet, in the end, O'Ree's contract was sold in much the same distasteful way Babe Ruth had been sold by the Boston Red Sox to the rival New York Yankees...

One could not have seen the Celtics win so many championships without Bill Russell. Likewise, the NHL would not have been the same without Willie O'Ree and the Boston Bruins. NHLer Mike Grier is so right in stating that O'Ree has to be seen in the same light as Jackie Robinson, as I repeated at the top of this piece here. Willie, due to his (at first hidden) handicap, can also be seen as the sport's version of Arthur Ashe, for my money. He concealed the fact that he did not see from one eye in order to keep playing - he would go down the length of the ice rink and not see a thing, unless he turned his head completely around! And yet he competed as a pro for YEARS, and even became a prolific scorer when he was switched to his "good side" and began amassing the impressive numbers that he did, mostly with the WHL's San Diego GULLS. Phenomenal. Such success was not entirely unpredictable though - everyone had noticed Willie O'Ree's great speed and natural ability, at every level. Said Bruins alumni and legend in his own inimitable way Bronco Horvath, a colorful teammate of O'Ree's, "from a standstill, Willie could take off flying, no one could catch him. His jersey used to billow out behind him."

As he said himself, on this 50th anniversary of his feat of merely stepping onto an NHL rink's ice that was previously off-limits to his kind, "we can do anything we set our minds to do." He got that from Jackie Robinson and passes it on now to kids of all ages, much as Arthur Ashe transmitted his love of tennis to all even as he was dying.

For his part though, Willie O'Ree, at 72, remains in good health and so full of life - and his love of hockey is infectious. More power to Willie The Bruin!

The preceding brought to you in conjunction with "U.A.N.G.A.D." -
aye, 'tis another TLB Prime Network simulpost!

Statistic Sunday - A Single Alarming One Will Do

That is simply unacceptable.
For, if we turn a blind eye to this,
effectively treating it as if it were
"nothing" in the process,
we cease to be human then.