As so many have surmised, through the years,
the more knowledge we believe to have,
greater still remains the unknown;
the unseen...
That applies to many things,
but let's specifically aim to the stars,
the most obvious of all examples,
here and now... 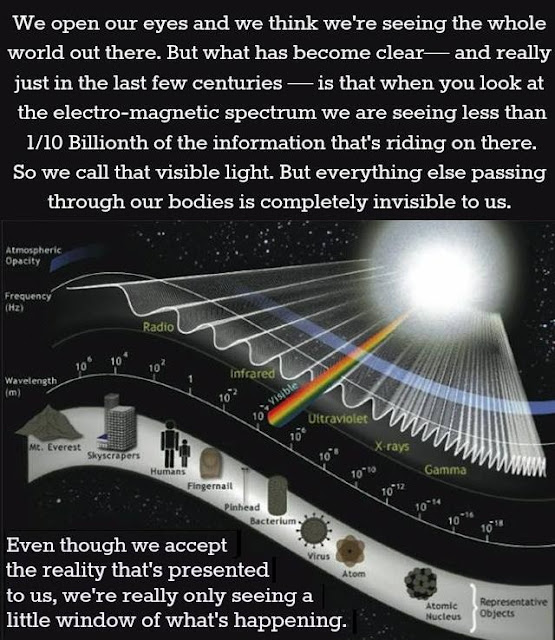 From Quarks to Quasars shared something extremely interesting on this subject just the other day on that famous FB place...  In total accordance to the spirit, laws and rules of Fair Use and FB's very own tradition (and raison d'être) of sharing everything, we share and add to all this here today - all for the purpose of illuminating and enlightening, evidently; that and nothing else!
Liked · August 15 ·

"In a literal sense, you can't perceive much more of the world than you already do. You only perceive what you really need in order to survive.

It is, basically, just like in our big corporative environments: the employee knows only as much as he or she needs in order to be functional, to be productive...  Man-made constructs can only emulate Nature, God's Creation, after all - and it does so at every turn.

We open our eyes and we think we're seeing the whole world out there. But what has become clear—and really just in the last few centuries—is that when you look at the electro-magnetic spectrum we are seeing less than 1/10 Billionth of the information that's riding on there. So we call that visible light. But everything else passing through our bodies is completely invisible to us.

Totally utterly fascinating concept here: there is visible light and there is invisible light out there too.  ''Everything else passing through our bodies'' said Mr. Eagleman - invisible to our senses but the greater measure of Light that makes up our universe.
Just try and imagine all the ramifications of that...!

Even though we accept the reality that's presented to us, we're really only seeing a little window of what's happening. There's so many examples of this, but one that's interesting to third-graders, but also neuroscience is optical illusions. [Illusions demonstrate] that these really simple things that you think are going on in front of you are not actually representing physical reality but instead your brain is constructing something.

''A little window'' indeed - but a glimpse of ''what's beyond'' as another wrote...  The example chosen to illustrate our near-sightedness, however, leaves somewhat to be desired here - as all it reveals is the capacity of our brains to twist reality around so as to fit our  desired perception of everything outwardly; and so are built comfort zones, too...

Our construction of reality shapes and alters our view of the physical world. It also limits our cognitive ability because we weigh our views more importantly than others. Mr. Wilson explains:
A lot of this happens unconsciously. We don't know how much we're interpreting. The world presents itself like it's reality and we don't know how much we've already filtered that. There's a psychologist named Lee Brosan who calls this naive realism. We perceive the world as real, but we're doing a lot of spinning as the information comes in. He talks about it as a real impediment when we're in an argument because each person sees the world as real and thinks the other must be crazy or deliberately trying to destroy things when in fact they're just trying to bring their own expectations and facts to the table."

And from this point on, we fall into the meandrous realm of psychology and its own various theories and perceptions of things, which have coined the expression ''naive realism'' in order to deal with the phenomenon... (Whoever this ''Mr. Wilson'' is, as he came into the fray, so went the refreshing aura of the theme explored here - alas! Still, we encourage one and all, just as the sparkling souls of From Quarks to Quasars did before us, to read more on the subject, investigate further, gather as much as they can in order to properly discern things overall - even though we truly can only perceive one billionth of anything at all, at any given time - and you can start that daunting process by clicking right here:  http://lifehacker.com/5891564/recalibrate-your-reality.)

Discernment is everything - we've said so countless times before on this very blog.

Ironically enough, before this particular and specific blogger dubbed himself ''luminous luciano'' (and he did so inspired by The Light, have no doubt about that!) he had taken to call himself, on those old message boards where he would routinely clash with others' opinions in a most, ah, opinionated way indeed, something totally different and very much akin to the sad concept of ''naive realism'' - we are afraid to admit...!  The handle, back then, was quite simply ''the realist''...  How naive it was, indeed. And how humble, too.  There was, also, quite a bit of resignation in that: and this years before any notion of ''ostavka'' had entered his life...! Verily, it was all about dealing with the limited perception of the cosmos that people have; all the while coping with one's own limitations in that regard, too.  Ah, boys and girls, brothers and sisters, adversaries and harpies alike, we tell you all here and now; what progress has been made since...!  ;-)

And we shall continue on that tangent, of course: for the journey has just begun!
Verily, it continues forevermore - even beyond the shedding of one's mortal coil...

Further Reading:
"What is the Electromagnetic Spectrum?"
http://imagine.gsfc.nasa.gov/docs/science/know_l1/emspectrum.html