Soon To Be Available As A T-Shirt!
You Know You Want One!
;) 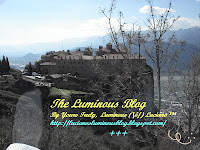 The Luminous Castle
by Luciano Pimentel

9 October 1967. After a few false starts and Che's telling them to get it over with, six or more shots are fired into Guevara's torso. One version of his reported last words were: "I knew you were going to shoot me; I should never have been taken alive. Tell Fidel that this failure does not mean the end of the revolution, that it will triumph elsewhere. Tell Aleida to forget this, remarry and be happy, and keep the children studying. Ask the soldiers to aim well." Others have claimed his last words to have been: "Shoot, coward! You are going to kill a man."

After his death, a death mask was made and his hands were cut off to ensure identification. His body was buried in a secret grave. Guevara was 39 years old.

In June of 1997, a team of Cuban and Argentinian scientists recovered the skeleton, missing both hands, of Guevara in the town of Vallegrande, Bolivia.
The bones have since been "rapatriated" to Cuba.


"The true revolutionary is guided by a great feeling of love."
~ Che Guevara

May we all be true revolutionaries then...

Yesterday, they celebrated angels
all across the world, they did, yes;
in France, Belgium, Canada...
A special breed of angels, aye -
on this day dubbed as the date for
"La Fête des Anges"...
Tha angels they were all celebrating
honoring and fondly remembering
were those unborn and still-born children
who were never tainted by human frailties
and remained, therefore, angels true and true.
Some never made it out of the womb alive -
the umbilical cord formed a tight noose
around their tender tiny necks
and they suffocated where their earthly lives
were in fact beginning...
A few made it out alive -
but were called back to heaven
shortly after their birth to humankind...

The first Saturday of October
has been selected as the international day
to remember and to mourn
these little angels -
their bereaved parents, oftentimes,
could not even hold them at all...
But they are remembered
and symbolically honored
by balloons, released into the air
with each infant's name
inscribed upon them...

I found it especially touching
that they chose to do that
on top of St-Joseph's Oratory
as far as the North American
contingent is concerned...
The Oratory - again -
being my father's favorite place
in all of Montreal...
And had the roles been reversed,
he would have been among these
loving emotional parents
who do remember
who can easily see,
in their mind's eye,
their child now in the Heavens above
as a little cherub, carefree
and full of joy.
Why not, agnostic, skeptic and other
unbelieving ones -
you too would be full of joy
if you could readily escape
all of thy earthly troubles
before they even began...!
Now we must endure
because he are here -
no cowardly exits allowed!
Nothing holding us from asking for some help
- heavenly assistance is readily available...