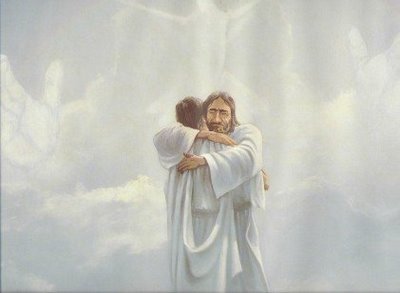 On This Date - In History - One Year Ago, In Fact...
The greatest man I have ever spoken to was greeted by the Greatest Man Who Ever Was

Both have had their detractors
Both have suffered injustices
Both were stabbed in the back by so-called friends
Both have even been criticized by lesser beings who are completely clueless, ignorant and have never -and will never- know them well...
Both have only done good in their earthly stay
never harming a soul during their brief passage
in a world that did not deserve them.

I see several things in common between them both
Yes, I do
And yes - as per custom - I am most correct
For, unlike the foolish naysayers
I KNOW THEM BOTH
I KNOW WHAT I SPEAK OF
I KNOW HOW GOOD A MAN HE WAS
AND HOW GODLY THE SON OF MAN IS
I know them in my soul
And both are a part of me now

Wherever I go
Whatever battle I shall wage
They will give me strength, henceforth
And I will move ever onwards
For The Glory of The Saviour
And for the pride of the father
whose name I bear with pride indeed