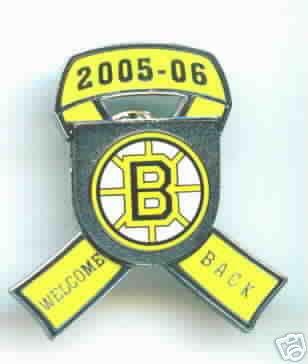 
Well - they took away this wonderful, truly luminous song and video - and I was so sure that I had it back on here for good (thanks to other web tools that proved to be as unreliable too... Suffice it to say, curse you, snapdrive.net!)

As long as the luminous blog will endure though, I will add the appropriate music to it - GOD SO LOVED THE WORLD is back playing here - and it is back here for as long as the net will endure!!!
The same artist, Jaci Velasquez, is a click away still - below you'll find her other great song, "JESUS IS". Enjoy! :) 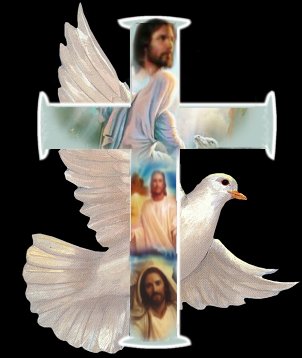 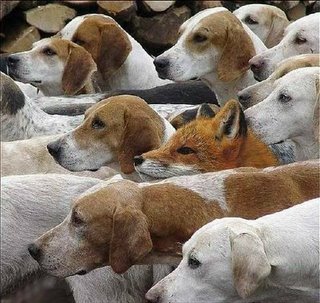 These days, one has to fit in - just in order to survive. Gone are the days of the lone wolf... and the ones of us who identify more with the cunning of the fox will have to be as clever - or as crazy - as one to elude the packs of dogs on their trail... Whether it be the up-and-comers who want to take away your job - to make it their own - or the old-timers who are not eyeing you favorably as the "heir apparent" of choice...

Blending in may mean to give in to that old survivalist logic - which I criticized recently - and which consists of joining the ranks of the opposition when we have exhausted all of our resources and effectively find no way to "come out on top"... It can prove to be an impossible task to do so at times, though - when the opposition simply will not have you on their side, no matter what you bring to the table. What to do then... hmm?

A common enemy is always good - Condoleeza Rice (of all people to quote...!) rephrased that age old wisdom when she uttered the following: "We need a common enemy to unite us." - and if SHE says it... it must be absolutely true! After all, she knows absolutely all about it... The USA, under her bosses' administration, has made more enemies worldwide than Rush Limbaugh and Howard Stern combined in all their years behind their respective microphones. It is essential... vital even... to find common foes to fight now... a common "cause" - and, as it is, it is "terror" and the war that was declared on it, vying for its eradication... The war on pollution will be won decisively first, I think...

Losing themselves in a crowd is impossible for Dubya & crew - but it is still an option for the everyman trying to survive in the cold cruel world out there - in the "real world"... It is a fine art - and, verily, the only sensible thing to do for the greater majority. No real sense in fighting an uphill battle every single day for the rest of one's life when there is a much simpler solution - such as deflecting attention onto the poor unsuspecting sap next to you. Such is the ruthless law of the jungle in the climbing of any corporate ladder; and it sure is sickening, is it not? The pursuit of happiness is the sole excuse that makes any means to achieve it permissible... almost. Happiness is some kind of luxury most can ill-afford nowadays though - mere survival is good enough as it is... Winning by whatever means necessary - now that is just wrong.

Still... Such is the essence of the American Dream - correct? "So, then, to every man his chance -- to every man, regardless of his birth, his shining golden opportunity -- to every man his right to live, to work, to be himself, to become whatever his manhood and his vision can combine to make him -- this, seeker, is the promise of America." - -- Thomas Wolfe (wow - another fine relatively modern voice to inspire the "newstyle wisdom" of the good ol' USA - is he not?).

At least, in the animal kingdom, there is considerably less of that bitter aftertaste that comes with any cunning move "à la fox"... Legend has it that GOD never regretted creating all the varieties of animals - however, reputedly, He regretted creating Man. As they say, there is always a bit of truth to every myth... to every legend... always an iota of truth in there, at the very least... 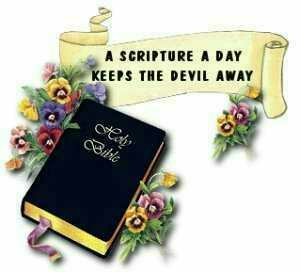 Zephaniah 2:3 New International Version
"Seek the Lord, all you humble of the land, you who do what he commands. Seek righteousness, seek humility; perhaps you will be sheltered on the day of the Lord's anger."

King James Version
"Seek ye the LORD, all ye meek of the earth, which have wrought his judgment; seek righteousness, seek meekness: it may be ye shall be hid in the day of the LORD'S anger." 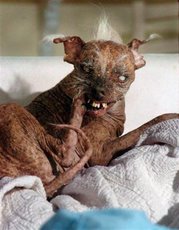 And, unlike Lassie, there won't be no happy "coming home" ending here. Sam was not, of course, a pretty pup like her (him actually, but it is not important right now...) nor was he as perky as Benji... or as cutesy-wootsy as the "Eu Queiro Taco Bell" chihuahua (whatever happened to that one - no, let's not go there...). Sam was a celebrity canine for all the WRONG reasons really... And, although his heart was failing (reputedly) he did not die of "natural causes" - but was euthanized. Euthanasia is a huge debate when it comes to the elderly and terminally ill - I believe it should be also when it comes to pets. However I will not make the case for this at this time... It is time to mourn that poor little beastie - the world's most unsightly mutt, to some. Me, I see one of the littlest creatures on God's green earth - and a kinder creature too than many more sightly ones! Sam's owner said she did not think there would ever be another quite like Sam (whose sparse tuft of hair atop its knobby head was a sort of trademark - along with the crooked teeth and the hairless body!) - and certainly no Scooby Doos or Snoopys can replace a real dog - no matter how unsightly and smelly it is! 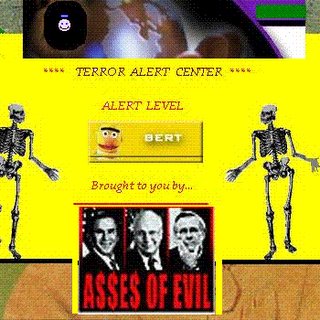 I recently saw on another blog (thanks to the magic of that BlogXplosion thingie - found somewhere on my sidebar... and the credits gathering process that is required to garner any attention / traffic through it! Indeed, it is another story entirely...!) that there were many who were glad to see the war on terror being fought abroad - on foreign soil - instead of in the heartland of America... Heaven forbid indeed that any further damage be ever inflicted upon the landscape of the land of the Free... and the home of the Brave...

I suppose it also makes sense that this "war on terror" is fought where the true cause for it is to be found - those oil reserves there, that are always coming up in any discussion on "the rebuilding of Iraq" (hey - they have had a bad man at their helm - but it needed no rebuilding up until so many bombs started exploding there... 2000+ U.S. troops casualties and countless local civilian casualties later, the rebuilding process is being hampered quite seriously by the regular appearance of the suicide-bomber "du jour"... but I digress...

I'll always remember the redneck on CNN, a day after 9/11... Some Joe Citizen who was picked at random by the TV reporter just to get "real feedback" from the everyman... and his words were "this is America - this sort of thing doesn't happen in America". Americans - North Americans that is - have been living in a bubble, which was burst open on 9/11 but quickly patched up and set up again - by the diversive tactic of the war to depose Saddam Hussein (much more than the security measures undertaken - inventive evil factions could always find a way to get some nasty deed done - if they had the effectives... and the guts.) All the terrorist wanna-bes have flocked to Iraq... maybe they are thinking of being in Iran as well, expecting the U.S. to be foolhardy enough to attack IT next... Europe is closer to their "terrorist training camps" also... so they will be there as well. But North America is by no means "hallowed ground" where no terrorist shall tread... we are just out of the way and too vast a territory to cover! Too cold to operate on too, these days... *brrrrrrr*! We can get ours too - we are NOTHING SPECIAL - personally, I don't think that God holds us in very high esteem at all... Israel is the Apple of God's Eye - we know that. Israel - not America! There should be no "special protection" for us - at all! If it is never to be as spectacular as 9/11 was - we can fall victim to a number of different attacks still... Bacteriological, Chemical or the run-of-the-mill suicide-bomber in our midst... no reason at all why it is not bound to happen in the most unlikely of places... Even the lousy subway system I have made use of so many times in the last 20 years - the Montréal subway - was found to be considered for an attack - soon! A recently apprehended terrorist was found to have in his possession several blueprints of the subway system... they KNOW where to hit it as to make the MAXIMUM number of victims - and the most impact. The war on terror is a never-ending affair...

Okay... self-promo part two!! The *other* luminous blogs you may drop by... most still under construction, but you may take a peek already - why don't you? ;)

Ponder rebelling against the mediocre status quo like the great ones did, on Unruly and Not Giving A Damn!

Ponder with me the merits of rambling on about everything and anything on Ramblings In Writ!

And, finally, ponder with me the futility of it all (!) on The Lukewarm Blog!

"Statistics Sundays" should be back - by the way - next Sunday!
In the meantime - you may enjoy THIS version of it!
Blessings!