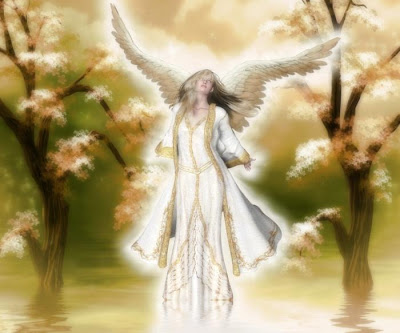 Shades of Angels In America...!

In one of those "aww - what a nice gesture" kind of initiatives, a publishing house AND the subway transit system of a certain northern town I am always somewhat depressed to loiter in, have joined forces to promote the works of a veritable myriad of POETS - and this way before they are all six feet under too! Aye, usually, genius and artistic merit is mostly appreciated post-humously - not any other way around! That is very regrettable indeed - and this initiative (not one, not two but three years in the running) has made accessible to the masses the works of many elegant wordsmiths that would have not be as widely known otherwise...

Each day, a different poem was spotlighted in the subway system's many electronic boards (there are at least two per wagon, I do believe... Just like in Paris' metro! This initiative was indeed a joint effort with Paris, promoting the French language in the process - that should clue you in furthermore on what northern town's subway this all took place...!)


All the above excerpts came under the third phase of this program - which was topically set under the umbrella of "LUMIÈRE" - in other words, LIGHT! Now that sure is one of my favorite topics right there...! ;)
(I encourage you all to make use of Babel Fish "technology" to try and translate these verses above - and those below - if you do not master FFL (French Frog Lingo!) yet! It will get you the gist of it - the essence of the message, at least?)
The previous two stages were HOPE (L'ESPOIR) and JOY (LA JOIE) - both of which saw the totality of the poems used collected in a tome published in France by publisher "Le Temps des Cerises" (uh... Cherry Season? Sometimes translating brand names is not such a good idea...!) - but here is the original announcement: L'ESPOIR et LA JOIE sont distribués en France par Le Temps des Cerises - le-temps-des-cerises@wanadoo.fr

LUMIÈRE's turn should come soon enough - by far, it was the most impressive collection of thoughts-in-writ that I have noticed upon my rare subway rides...
Each time I did ride the subway though, I made sure to peek at the Alstom electronic board to see what was "on" that day... News and poetry, as always - oh, and a lot of ads with rather annoying animation!

To partake of that wonderful job that I found in marketing, I did ride the subway a trifle more often than usual - it took me back to my days as a student; THAT was fun. Plus the paycheck is always welcomed...! Thus, I took note of more poems that way...

None was more impressive for me than the following one (that I jotted down from memory) - I saw it on a grey morning one day and it lifted me up for the entire day...

Mme. Nicolas is a fine and refined plume as they say...
Verily, I tell you, it inspired me my own bit of poetry that day
And I verse poetic only occasionally - yes, quite rarely these days...

This IS Her Month!

May is the month of MARY - Our Lady through whom we gained an Earthly Presence of GOD...
Whether you believe or not - you must admit that MARY is the GREATEST LADY OF ALL -
no so-called lady today and even throughout history comes close, not even the saintly ones, no!
And, in Our Lady, particularly since her most fabled apparition in Fatima, Portugal (with apologies to Lourdes, France and the spectacular apparitions in Zeitun, Egypt) we get a connection to Heaven that is concerned with the most mundane of all activities on our banal earthly realm - politics!
Click on any picture here for MUCH MORE on all THAT...!

The above picture shows us a MIRACULOUS STATUE, nothing less!
The statue was made to commemorate the luminous apparition that gave all-important (heavy with political consequences for the world over too) messages to three children entrusted to relay it to the adults... Alas, the adults were too obtuse to properly understand the message and kept rephrasing it, convinced that "the children are only children - they misunderstood" and know not what goes on in the world - right?
The message was to convert RUSSIA - something Lucia, the eldest of the children, emphatically defended as "no mistake" and exactly what needed to be done if the state of affairs in this wretched world was to get any better at all... The obtuse adults ostinatingly refused to adhere to this leitmotiv - after all, it was the USSR now - "Russia" was an archaic way to refer to that part of the world...
Turns out, of course, that it is Russia all over again - all in all, the appellation "USSR" was so short-lived, Our Lady did well to ignore it, as GOD surely ignores much of the folly of man... Well, let's hope that He Does... eh?
As for the MIRACULOUS STATUE -
It curbed its head one time - when it was paraded around in a small town in Portugal during a procession. A child afflicted with a debilitating illness had asked for the privilege to "hug Our Lady" when it passed by her door (the procession took to the streets like that, yes) and it was allowed to her. Why not indeed - in America, there is this "Wish Foundation" that grants kids their probable last wishes; meeting some sports figure, going to Disney World... In Europe, at least, the wish granting ihas more lasting repercussions - if you see what I mean...
The little girl was raised on a chair and the statue lowered a bit so that they could meet halfway - and when the child hugged this very statue pictured above, the statue's head tilted towards the child, as if Our Lady had taken over and was hugging the child back. The little girl experienced a spectacular recovery from that day on; a recovery that no medical expert could explain.
And they say statues are no good - some religions forbid them outright. Graven images of any kind are shunned, banned and abolished.
Well...
There is always an exception to every rule - GOD Willing...!

Labels: The Month of Mary When I made my review of 2006 and compiled a list of all the good souls that had departed from our venerable mudball - all those who had passed on or crossed over, whichever you prefer - I confess to having forgotten some names for the simple reason that I had no idea they were among the MANY who had left us...
Not entirely my fault - the MEDIA did not care enough about these greats to make as ample mention about them as they did of, say, Saddam...

Actresses Adrienne Shelly, Anicée Alvina (pictured above) and Claude Jade were among those I had no knowledge whatsoever of their passing until we were in fact way settled into 2007 - they all passed away in the last two months of the dreadful year of 2006.

(In re: 2006, some Frenchmen said that "c'est l'hécatombe" - and, considering the fact that most of their celebrities who died in such large numbers that year did pass away in the city of Paris - and that Paris harbors underneath it the CATACOMBES (a several miles long tunnel where the poor buried their dead, starting in approximatively 1790 A.D. until late in the nineteenth century; an estimated 7,000,000 people were clandestinely buried this way over that time...) - I'd say that the French have every right to react as they do...)

I'll try to make up to my own faults in missing the proper timeframe to honor the three thespians many forgot to mention (while blaming the media for it, amply) - it is a good thing too that, with blogs, we can play with the datestamps on our posts...

Many an anonymous stalwart passed away in 2006 - many such greats pass away every year. It is up to those who know them to make sure that a testament to their uncelebrated everyday heroism (as I'd call it) does remain in their wake.
I have made sure of that, for my virtually unknown hero, best friend of all and dear sire.

Add to this list of the forgotten the 85 children and teachers who were murdered in Afghan schools in 2006 alone...

I'll take this opportunity to join those who are mourning the 32 who were murdered in Virginia Tech so very recently...