Since we've recently spoken of our friends on that famed compendium that sells shares of itself on the stock exchange, too - and quite recently at that, too - let's continue in that vein now, here, on the luminous blog, by collecting a very small sampling of all the luminescence that can indeed (and amazingly enough too, of course) be found over there...

We will immediately credit the brains behind the science page titled ''GC Science'' - for they have proven, time and again, that there is hope for the egghead society at large, fighting the good fight, fending off all attacks from non-believers and from outright idiots alike, combating the alliances of the most obnoxious variety (such as that ''Team Atheism U.K.'' there...!) and teaching them many, many lessons in the process; so many precious reminders that the silly fools, who chose not to believe, so sorely need.

Such as this: reminding one and all just who the Father Of The Big Bang really is - Georges Lemaître, a contemporary and friend of Albert Einstein himself who just happened to be a Belgian astrophysicist and Catholic priest as well!  It was he who developed the theory of the Big Bang, not any unbeliever with a sound understanding of the cosmos but zero faith to back it all up!

In January of the Year of Our Lord 1933, Lemaître travelled with Albert Einstein to California for a series of seminars focusing upon the famous theory he had formulated. Lemaitre described the beginning of the universe as a burst of fireworks, comparing galaxies to the burning embers spreading out in a growing sphere from the center of the burst. He believed this burst of fireworks was the beginning of time, taking place on "a day without yesterday." After he had finished detailing his Big Bang theory, Einstein allegedly stood up, applauded, and promptly stated, loud and clear for all to hear: “This is the most beautiful and satisfactory explanation of creation to which I have ever listened.”  Tell us of a single atheist who so impressed the great Albert...!  (And don't any of the God-less even think of discrediting Albert's impact with any of that revisionist ''Einstein didn't have it all right after all'' hogwash - it doesn't wash! His was the most brilliant mind of his era and even then and even so, he was respectful enough and humble enough to know that another, even though a man of the cloth, had answers that he could not provide himself!) 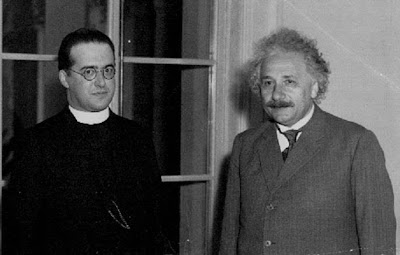 Here is a picture of Lemaître and Einstein together,
circa 1933 indeed -
we cannot refrain from indulging in a little bit of
"luminous connections"  underlining here,
once again, and noting the striking resemblance these two
bear with these other two right here...

The French-Canadian Frère André with a visitor on that famous mountain
upon which rests his precious Oratory, circa 1911:
Frederic Janssoone, Franciscan Priest hailing from
Ghyvelde,France but relocated by then in nearby
Trois-Rivières... Now, this latter pair did not
delve in starry matters: they dealt beyond those things,
straight towards the Hand Behind The Big Bang...!

But let us not get too carried away now
into our trademark (and world famous)
luminous connections...!

One more though, before carrying on...
And a direct message to the core
of atheism itself... 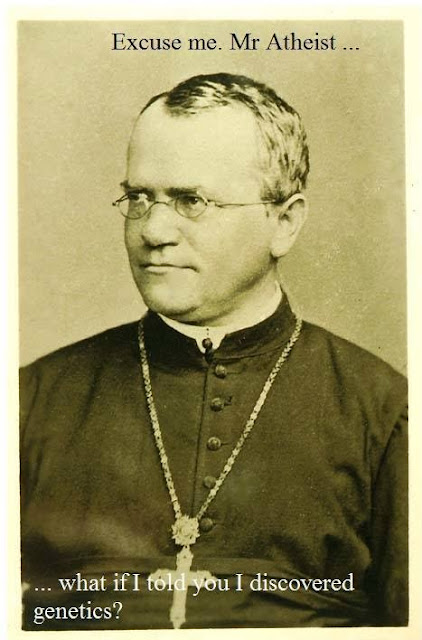 Aside from Georges Lemaître, there was also vital
scientific contributor Gregor Mendel,
an Augustinian Friar for his part,
whose work in the field of genetics
(inwards star-fabrics, for we are all made of stars -
everybody knows that, now...!)
was only recognized after his death...

And since we like the number *3* so much -
let's add to this short list the works of one
Jérôme Jean-Louis Marie Lejeune,
French pediatrician, geneticist and
Servant of God...!

And now back to our regularly-scheduled blogging here...

It is great, indeed, to witness Religion and Science working hand-in-hand, as they always should, for the greater good of all of humankind.  As much as a separation of Church and State was necessary for societal well-being, the unity of Religion and Science is as much a necessity for the global well-being as it is not even a question whether there was a Creator or not: of course, there was!!!

Albert Einstein did not say these words for nothing, you know: 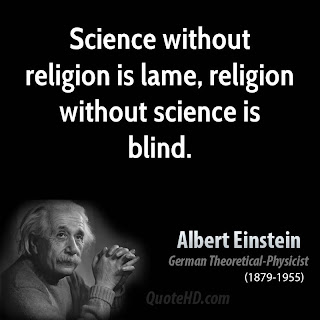 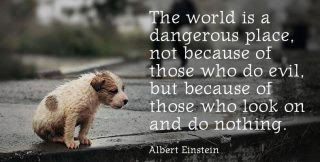 And he said this, too - which makes us feel great
for having deserted before even getting into it... 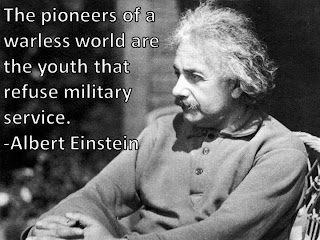 And he also said this, you know: 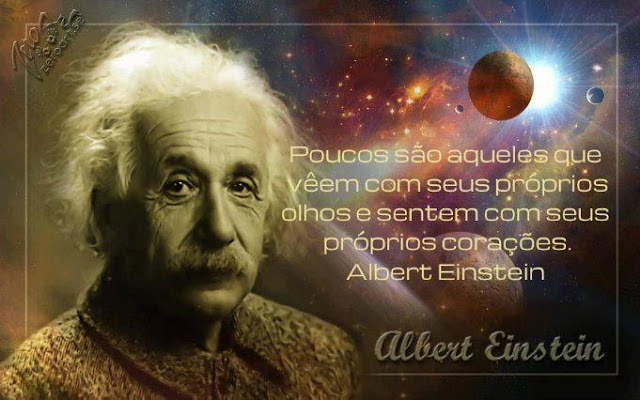 Oops - we got carried away this time...
Portuguese translation -
translated right back into English now:
Few are those that see with their own eyes
and feel with their own hearts.
Especially true for the times we live in, now... 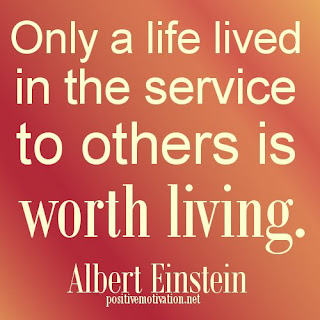 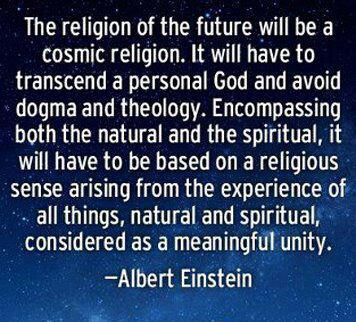 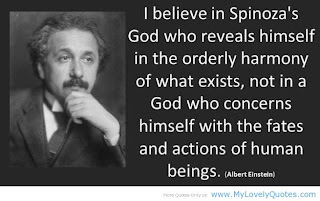 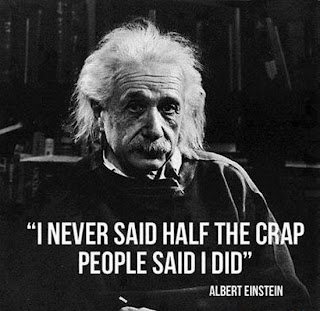 So then, enough about Albert - after all, he is not God!

Albert Einstein is with the stars now - as are Lemaître, Mendel, even Lejeune,
Brother André and Father Janssoone...

The rest of us have to continue looking up,
hazarding our best guesses, from down here...

And, at such a perilous endeavour, we are getting pretty darn good,
we dare to say at this time, here, on the luminous blog -
with the evidence being shared by
scientific minds with faith,
such as the GC Science folks, once again: 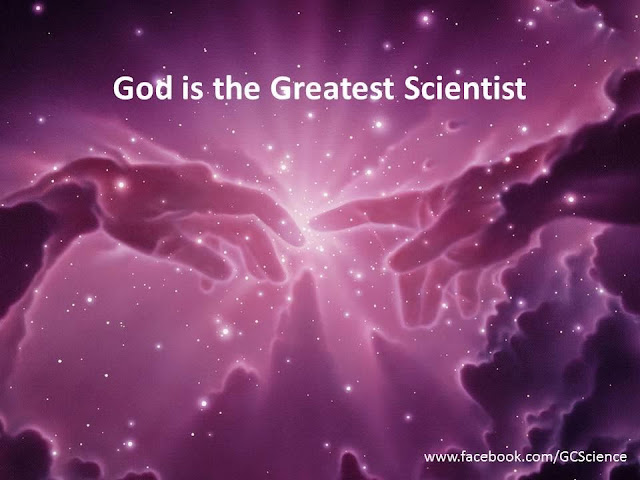 Comments and shares from this group never fail to bring forth interesting material worth one's time - here is but an excerpt (or two!) ...
In the 20th century, great strides were made in the field of astronomy. First, the Russian physicist Alexandre Friedmann discovered in 1922 that the universe did not have a static structure. Starting out from Einstein's theory of relativity, Friedmann calculated that even a tiny impulse might cause the universe to expand or contract. Georges Lemaître, one of the most famous astronomers of Belgium, was the first to recognise the importance of this calculation. These calculations led him to conclude that the universe had a beginning and that it was continuously expanding right from the outset. There was another very important point Lemaître raised: according to him, there should be a radiation surplus left over from the big bang and this could be traced. Lemaître was confident that his explanations were true although they initially did not find much support in the scientific community. Meanwhile, further evidence that the universe was expanding began to pile up. At that time, observing a number of stars through his huge telescope, the American astronomer Edwin Hubble discovered that the stars emitted a red shifted light depending on their distances. With this discovery, which he made at the California Mount Wilson Observatory, Hubble challenged all scientists who put forward and defended the steady state theory, and shook the very basis of the model of the universe held until then.

Hubble's findings depended on the physical rule that the spectra of light beams travelling towards the point of observation tend towards violet while the spectra of light beams moving away from the point of observation tend towards red. This showed that the celestial bodies observed from the Californian Mount Wilson Observatory were moving away from the earth. Further observation revealed that the stars and galaxies weren't just racing away from us; they were racing away from each other as well. This movement of celestial bodies proved once more that the universe is expanding. In Stephen Hawking's Universe, David Filkin relates an interesting point about these developments:  (…) Within two years, Lemaître heard the news he had scarcely dared hope for. Hubble had observed that the light from galaxies was red shifted, and, according to Doppler effect, this had to mean the universe was expanding. Now it was only a matter of time. Einstein was interested in Hubble's work anyway and resolved to visit him at the Mount Wilson Observatory. Lemaître arranged to give a lecture at the California Institute of Technology at the same time, and managed to corner Einstein and Hubble together. He argued his "primeval atom" theory carefully, step by step, suggesting that the whole universe had been created "on a day which had no yesterday." Painstakingly he worked through all the mathematics. When he had finished he could not believe his ears. Einstein stood up and announced that what he had just heard was "the most beautiful and satisfying interpretation I have listened to" and went on to confess that creating the "cosmological constant" was "the biggest blunder" of his life. (...)

In the winter of 1998, two separate teams of astronomers in Berkeley, California, made a similar, startling discovery. They were both observing supernovae – exploding stars visible over great distances – to see how fast the universe is expanding. In accordance with prevailing scientific wisdom, the astronomers expected to find the rate of expansion to be decreasing, Instead they found it to be increasing – a discovery which has since "shaken astronomy to its core" (Astronomy, October 1999). 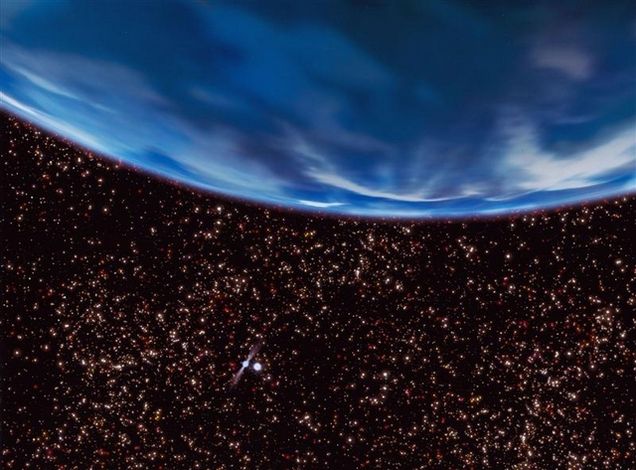 In closing though, to veer back towards ''the cause'' - which is refuting so-called (sorry excuses for, really) ''arguments'' for the theory most dear to atheism...  We cannot not quote the one, the only C.S. Lewis on this, as he took the time to actually pen splendid advice on how to deal with the whole sad lot of them... 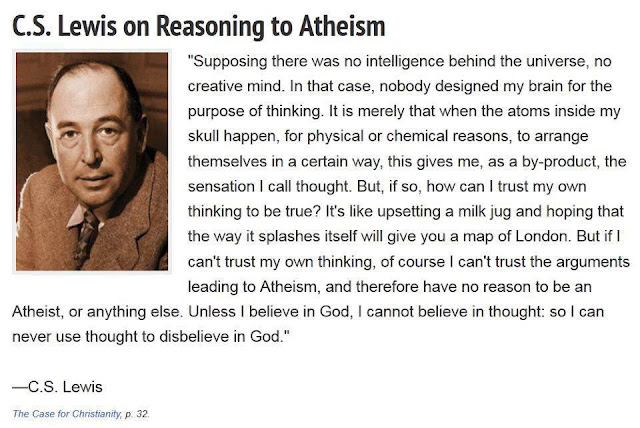 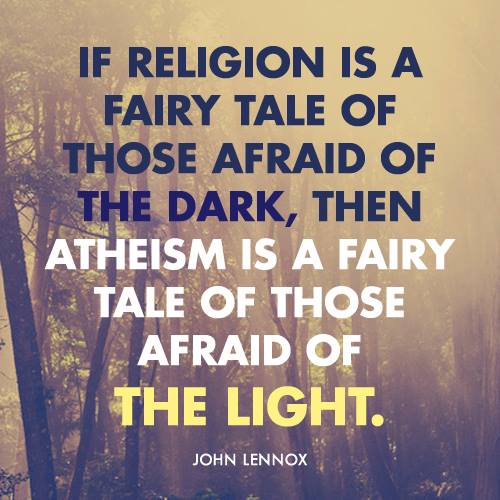 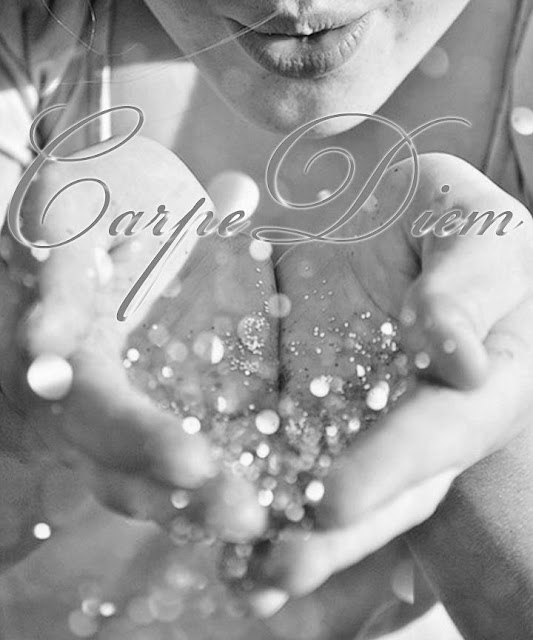