It's Christmas Time - Plenty Of Reasons To Be Afraid 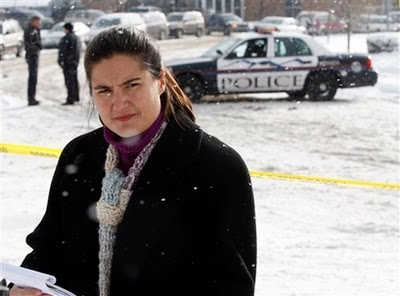 "Susan Medina, a spokesperson for the Arvada, Colo., Police Department, considers a question from a reporter during a news conference outside a youth ministry dormitory on the campus of Faith Bible Church in Arvada, Colo., early on Sunday, Dec. 9, 2007. A gunman entered the dormitory and killed two residents while another leaving two others injured and taken to hospital."
(AP Photo/David Zalubowski)

I dare post Susan Medina's picture
in relation to this sad event
because she looks so much like
my own long-deceased cousin
Lionilde Pimentel.
+++
News such as this
would have saddened
and shocked her.
And I consider her
like a second mother,
very nearly.

She definitely could have been
Susan Medina's mother, also.
Uncanny resemblance...
+++

When even such hallowed ground
as the 'New Life Church'
and the "Youth With a Mission" center
(now forever stuck with a new
somber, darker double meaning)
can become places
where you will be shot and killed
- it is clear that NOWHERE is safe nowadays
(and no wonder it also happened
most recently, in a shopping center.)

Not everyone can handle
the Christmas Spirit -
not when they have access to guns, no...

Not when there is
only hatred in their hearts.

This Holiday Season - Reflect On These Things: 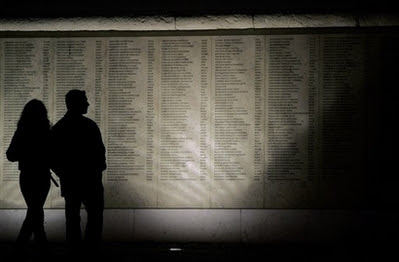 A young couple looks at the names of Portuguese soldiers
killed in the colonial wars in Africa from 1961 to 1974
at a monument to the fallen, in Lisbon Nov. 24 2007.
A groundbreaking television documentary series
currently being aired on RTP is confronting Portugal
with unsettling aspects of its recent history.
Aspects previously unknown to some...
(AP Photo/Armando Franca)

In Portugal, they are finding out
that, behind polished appearances
and political propaganda,
they are just as bad as the Spaniards,
the Belgian and every other colonizer...
Aye, they are hospitable -
sim, they worship Nosso Senhor
and Nossa Senhora de Fatima -
but they have their dark side too...
(At least, what they did,
well, it wasn't without provocation...!)

In Pakistan, modern-day Christians
are finding out what it was like
for the First Christians -
and to those ignorants who say
that Christians are "not persecuted anymore"
and are, instead, the ones persecuting
and committing "atrocious, unspeakable acts" -
read this:
Muslims in Pakistan are threatening
the lives of the Christian minority
telling them to conform to Islamic Law
or they and their loved ones
(and their homes)
will be bombed to smithereens!
This information has been broadcast
through many sources,
including the VOICE OF ISRAEL!
Now, why would I, for instance,
doubt the veracity of this news story -
when it comes from the Jewish,
whom we accuse of having killed Our Lord?
They are kind to accept the blame
(while looking forward to the advent
of "their" Messiah...)
and hold it not against us to feel as we do
(and we, in turn, have no hatred
in our hearts - for the Lord Jesus Christ
CAME TO BE CRUCIFIED
IN THE FIRST PLACE!
It takes some getting used to the concept,
I suppose...
Not every Rabbi can do it...
I do not expect an Imam to embrace
the concept any more easier!
But I digress...)

In Sudan, of course,
it was all over the news -
an English lady's intent was her life saver
as she had very harmless intentions
and some extremists were still
calling for her head...
Mercifully,
Allah showed her Grace
through the Sudanese Premier...
(Thus, quite obviously, there
we found out that, in Sudan too,
there are those with too much zeal
and there are moderate muslims
who will listen to reason.)

In Canada, meanwhile,
in the absence of any significant problem
a parade of little inconveniences
has been going on, in Quebec,
over the "REASONABLE
ACCOMODATIONS"
un-debate...
What people are finding out there,
is that, under all the apparent
gentleness and openness,
Canadians
(for they still are that, whether
they want to admit it or not,
in the province of Québec)
are truly racist pigs
at the core.
They cry about, lament over
and lambaste because of
truly insignificant little
annoyances
of everyday life -
the sort of which cannot be avoided
when cultures and religions clash.
It is utterly pathetic -
and totally predictable,
coming from the historical mistake
that is Quebec...

What we can retain from ALL this though
is the following:

No rampant paranoia required now -
only calling for CAUTION here!

Don't trust everything
your government tells you
or even your kins, pals
or guru!