I can finally be truly proud of being stuck in the dead of winter - with the dead of winters past, the dead (in spiriti - no typo) of winter present and the soon-to-be-dead of winters future...!
For, this year, there shall be light indeed!
Aye, there shall be light on the dreary streets of Montreal - streets that remain covered in slush (that disgusting mixture of snow, rain and car emissions! NOT for the weak of stomach!) and other detritus...
But I find myself digressing yet again - deviating from the core subject here, so soon, and it must not be, because the core subject is... LIGHT!

Hence the fact that it gets to be spotlighted here - on the Luminous Blog!
(Duh.)

Every year since... well, not all that long ago really... there is a festival that comes along, way ahead of the season of festivals, that truly stands out from the rest of the pack for me - and that is, of course, the MONTREAL HIGH LIGHTS FESTIVAL - better known as (truly better known as) the MONTREAL EN LUMIERE festival! Because, indeed, for once, the French appellation is infinitely better than the English one - merely due to the fact that it evokes much greater incandescent things than mere "highlights" (which could be, ultimately, no more than a scoreboard, a recap of the events and unevents of the week and some sordid blow-by-blow report as well... see what I mean?!?)

LUMIERE alone is a word that evokes so much more - and it is unquestionably the key word here!

The expression "mettre en lumiere", which is heavily implied here, also evokes much more than a mere succession of spectacles and showmanship - for me, at any rate, it does and so should it *for thee*...!

For there is so much to shed light upon in and around Montreal - as much as there are so many to enlighten out there...! Digression, I know...!

Mind you the same applies to any other town, village, township or whatever - but that is a given... I just focus on this particular sleazy city for the specific reason that it is where the festival is at; that is all!


This year, though, the festival is honoring a portion of its mosaic that deserves the spotLIGHT indeed - Montreal High LIGHTS its Portuguese community in 2010 (and I am not sure why! Is it the original immigration wave"s anniversary, again...? Or a subsequent wave"s? I have no clue! And it matters not anyhow!)

The evidence is here:

Further more, every Montrealer is invited to refine their taste buds as well - put away the damn beer and drink some fine WINE, at last! Not just any wine either but the fine wines of Portugal:

And, on top of all that, this year, they have invited everyone "that matters" in relation to the theme bestowed upon the festival - and that means every Portuguese stalwart there can be (by the flavor of the moment standards) in various fields of expertise too...

Guests of honor include, thus, the likes of gastronomic chefs such as Rita Chagas, Rui Paula and Leonel Pereira as well as singers of all styles (still mostly fado though) from Misia and Ana Moura to the multi-talented thespian Maria de Medeiros (pictured below) who can indeed also SING...! I had no idea, until this festival revealed this tidbit of trivia to me! Thanks, Montreal En Lumiere! Thank you very much (I guess...!) 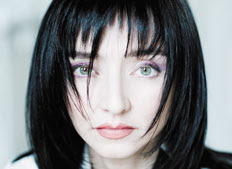 Just what we needed - a Portuguese version of Carla Bruni.
Viva Portugal!


Of course Montreal En Lumiere tries to tack on some artists, chefs and others that have no business being remotely associated with Portugal - such types as Yann Perreau, Matt Herskowitz and (yikes) Zachary Richard...! The only thing these guys have in common with Portugal is their envy of its climate, fine wine and fine weather, and liking to travel there in order to escape the dreariness of the Montreal winter...!

That is nothing though compared to the affront of seemingly pairing up this "tribute" to Portugal with the "mid-life crisis of Dionysus" - in all its orgiac excesses... Shame on you, festival organizers, for lumping all that crap in with the "honor" to Portugal...! (Although I am sure that the star of "Henry and June" on the silver screen and star of "Sextet" on stage, Medeiros, does not mind this convergence at all - but that is her prerogative and hers only... It is her forte and niche as well - but this is yet another digression, I am afraid...!)

Oh - and was the presence of Tony Gouveia truly necessary, tell me?