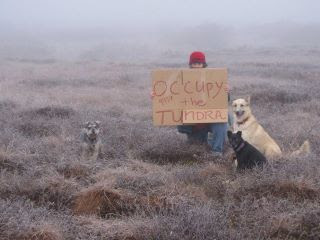 Everyone has heard of the Occupy Wall Street movement, these last few weeks...

The gap getting wider and wider between the rich and the poor, the numbers being unequivocal on this subject (400 individuals in Canada owning 56% of the riches - 1% of the good ol'USA having the same that 99% of the rest have to split amongst themselves) - what else is there to do than blow the lie off this crap and shout "IT'S NOT FAIR" - for the whole world to hear?

The whole world has heard and soon joined in the movement, occupying every spot that made sense across the map - trying to rally the majority to DO SOMETHING about it and not allow the minority to get away with it anymore.

The movement appears to be running out of steam now - as winter approaches, all North American towns exposed to it are surely going to stop occupying outdoor space when it gets too cold and unpleasant to do so.

They are not so used to it as the denizens of the Tundra seen above!

And speaking of whom...

The "Occupy Movement" has spawned new and innovative ideas on how to FIGHT BACK - peacefully.

New and, some, age-old concepts regarding the best methods to prioritize when one wants to generate some very real CHANGE...

We, at the luminous blog, can only advocate one thing:
Do like MLK, Rosa Parks and Gandhi

Martin Luther King, Jr.
Rosa Parks
Mohandas Karamchand Gandhi
- just three of the countless luminaries
(many of which remain nameless,
and thus illustrious unknowns)
who paved the way for change in their own way
and never raised their voice in anger in order to do so.


However, if an angry tone is not required, the ability to promptly deliver the suitable retort in a timely manner will be immensely important -
perhaps even the key to success...

Proverbs 15:23
23 A person finds joy in giving an apt reply—
and how good is a timely word!


Better yet to follow the example of the artistic protester - realist that nothing will ever truly be changed by the hands of man, altruist enough to share what he has with his fellow man but conscious enough that the time for true Sharing, the true Change, it has yet to come and only He Will Bring it about...


¤☮♥ PEACE ♥☮¤
The most
valuable possession
you can own
is an open heart.
The most powerful weapon
you can be
is an instrument of peace.
~ Carlos Santana ~ 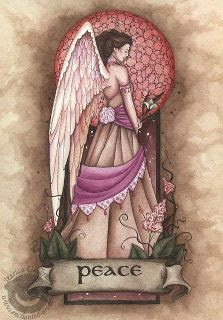