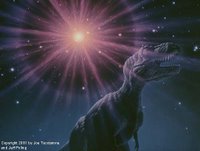 
If you care to check out the veracity of these historical facts - be my guest and click on the link at the bottom of this post...!
Link
// posted by Luminous (\ô/) Luciano™ @ 7:33 AM