The Real-Life Saint is not Simon Templar 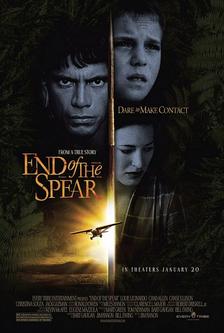 As many of you know by now (anyway, I hope that you do and haven't been witness to some of my sometimes angry blogs without a clue!) I have suffered a tremendous loss in my life, one that I have often referenced as irrecuperable in the earthly sense, and that alone has sufficed to fill me with a lot of anger these past ninety days or so... There are a multitude of convergent factors, to boot, that fill my heart with anger - but the main factor is, unquestionably, the loss that I've suffered in March 2006.

And now, by sheer happenstance, I discover not only a new Church but also an example of forgiveness and love that has no equal -or very few- in this world... Some names, if not all, are indeed pre-destined, and such is the case of Steve SAINT. His father was a missionary and was speared to death in 1956, along with four other missionaries, a mere two days after having reached out to the Waodani tribe in Ecuador. The Waodani's philosophy was to kill or be killed, so, in their view, that was the right thing to do.

What happened next is nothing short of MIRACULOUS.
The widows and orphans left in the wake of the killings mourned for two years - and then reached out to the Waodani themselves. I would have had thoughts of revenge, à la Charles Bronson or Chuck Norris - they did not. If they did, they suppressed those feelings completely with extraordinary understanding of the Waodani and love for them. They reached out and won them over - and today, the son of the main missionary, Steve Saint, lives with his family among the Waodani who are now a peaceful tribe.

A movie was recently made about this remarquable true story. The site dedicated to the movie's story, cast and trailer is linked here today.
Such love has only the likes of Mother Teresa to equal it - and then, the madre had not been hurt the way these women were; the five ladies who all lost their husbands on that same day back in 1956.

I can only wish that I was able to be as saintly.
Then again, my quarries are not as uncomplicated as the Waodani are ultimately. The Waodani, for all their past murderous ways, acted not out of malice. My adversaries are malice in the flesh. It makes a world of a difference; and if I was to be saintly in the least here, I would have to be so in an even more extraordinary way than Mr. Steve Saint was. For he forgave one incident - and became attached to his own father's murderer, in a father-son relationship that endures to this day. I would have to forgive years and years of malicious intent, and any sort of father-son like relationship with the main fiend is, in my case, absolutely impossible.
The Bible does say to love our enemies - for it is more meritorious than to love one's friends - but we are also warned to be careful and steer clear of our enemies, before they succeed in taking our lives.

Losing one's life though is not as disastrous as losing one's soul.
We must never forget that too...