All-Hallows' Eve - and nothing's stirring, not even a louse... 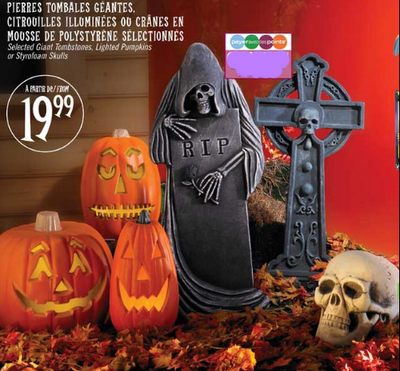 What can one add about a so-called "holiday" that celebrates horrendous and fiendish creepy creatures, death and decay, not to mention very bad eating habits...?

Two things are at the very "heart" (so to speak) of this crapfest, year in and year out, of course - aside from the obvious carnivalesque aspects of it, where one can enjoy the freedoms of going incognito and letting loose while hiding behind an actual mask -not merely an imagined even though very real one- this is party time for death and witchcraft addicts... When it is "cool" to look evil, if not be it outright... Death is "cool" too - though none of these bozos seem to know what it truly entails... Look at the above picture for instance; twenty bucks for a fake tombstone. Wow, what a deal. Morbid yet so "cool" - will it be stored away in the "off-season" between halloweens or shall it remain as a permanent fixture of the decor? What a dilemma... Keep on ingurgitating candy as if there were no tomorrow, kiddies, and you will get a real one for all your efforts, not a fake one... But that is another story...

In a society where everything is trivialized (that is, up until that crucial and cruel moment in time when it happens to YOU...) we can see that nothing would be sacred, not even death... Death which, anyway, shall be no more one day... The witchcraft crap though - with clueless pagans thinking it is all harmless and even "good", when they know not what else is truly out there, in the field that they have chosen... Witches, true evil ones, are not easily spottable. If rewritten vampire mythology has it that even ol' Dracula can walk around in broad daylight without burning to a crisp, believe you me when I say to you that no witches fly around on broomsticks... Legend has it, actually, that they use rather strange ointments actually, and that those, meticulously spread out upon their naked bodies, allow them to levitate... Can you accomplish that feat, neo-pagans who worship the ground J.K.R. spat on? I doubt it! That is because Samhain customers are not "witches" - and, once and for all, they should be real HAPPY about that! Now go ahead and choose a new name for yourselves... I suggest "eclectics"...
Now back to the dead, shall we? Ghost stories have that perennial interest quality - but the interest in them hits its peak around... NOW! Those are usually tales of hauntings - though only the ignorant and incognizant will think that ghosts are perpetually haunting us... Some ghost stories are better than others, evidently... Some are 100% TRUE.
Such are the tales from Merchant's House Museum... Only one example of the kind, "out there"... Click on the link above or below, and if the article is not to be found any longer, read it in the comments section right here, on TLB Prime! If all else fails, click on the ghastly skeleton-tombstone above - it should take you to the official site of origin!

I'll say this only in memory of the great, delectable Carolyn Jones -
"happy halloween"! May you never celebrate it again though...
Link
// posted by Luminous (\ô/) Luciano™ @ 4:12 PM

NEW YORK - The young man bent over his dying father in a dimly lit room, trying to hear the slightest breath. It was too late. Seabury Tredwell was gone forever, lying motionless in his bed.

For the next few days, the perfume of lillies drifted through the Manhattan town house as the wealthy merchant's body lay in a coffin in the front parlor. There was no embalming in 19th-century New York and the odor of decay had to be masked.

The scene was first played out in 1865, but was recently re-enacted at a museum that has been called New York's "most haunted house." The Merchant's House Museum preserves the 19th century home as it was when Tredwell lived there with his wife and eight children, plus Irish immigrant girls who worked for them.

The family lived and died in the three-story house just off the Bowery in Manhattan, and some say the family remains in spirit: Visitors have reported seeing the ghost of a petite woman walking through the kitchen and her bedroom — daughter Gertrude, who died in 1933.

"There's a reality here that you don't get in other Halloween experiences," said Pi Gardiner, director of the Merchant's House Museum. "We're real to begin with."

The museum is just one offering in a city that stimulates the senses to the extreme — but especially on Halloween.

A Brooklyn waterfront warehouse features a striking bit of experiemental theater called "Hell House," based on the haunted tours given by some Evangelical churches around the country to scare people away from sin.

While an earlier Los Angeles show called "Hollywood Hell House" satirized the moralizing of the Evangelical haunted houses, the New York version avoids irony in the hopes that audiences will draw their own conclusions. The story involves a cheerleader who undergoes a painful, bloody abortion, two gay men wedding just before one dies of
AIDS, and a "nerdy" girl being raped at a rave, then shooting herself in the head.

The half-hour walk by candlelight through Merchant's House offers its own take on current events — at least, the current events of more than a century ago.

The events are staged in an elegant, red brick and white marble row house built in 1832 and purchased by Tredwell, a prosperous hardware merchant. Preserved virtually intact, its moldings, mahogany furniture and the clothing worn by the Tredwell daughters were once part of a fashionable neighborhood in a city that was on its way to matching the worldliness of London and Paris.

In a basement kitchen, "funeral biscuits" are prepared for a recreation of a 19th-century rite that is part of an exhibit on death and mourning. The home also includes instruments for "bloodletting" — a practice meant to remove poisons from a sick human body, hopefully to ward off death.

One bedroom re-enacts a scene from Gertrude's childhood, when the girl was close to death from scarlet fever. Her mother, Eliza Tredwell, kept watch for three days and nights as she wrote to a friend.

"In our world of instant gratification, this is history masked as entertainment," said Christine Scott, an actor who plays Eliza. "These are ghost stories with a past."

is another place you should check out, folks...